I planned my South America journey (Cartagena, Bogotá, and Santiago, Chile) around an amazing flight deal from Santiago, Chile to San Francisco, California on Air Canada. But, before I could get to this glorious flight back (business class on Air Canada for 50,000 miles), I had to first get down to Santiago.

I found a $235 flight from San Francisco to Cartagena, Colombia, and I figured visiting Colombia would be a fun way to make my way down further south. In booking a flight from Cartagena to Santiago, I was able to snag 2 business seats on Avianca (one from Cartagena to Bogotá and another from Bogotá to Santiago the next day) for 40,000 United miles. This was the saver business price, and the cost for an economy ticket was the same during those days.

What I loved most about this ticket was my ability to spend an afternoon and night in Bogotá. However, my flight to Santiago — which clocks in at just under 6 hours — departed at around 7:30am, which meant I had to leave my hotel at around 4:30am. So, I was pretty exhausted when I got the hotel, and very thankful to have had lounge access.

Avianca is based on Bogotá, so I was expecting something a bit fancier in their main hub’s business lounge.

The lounge was very clean and empty around the time I arrived (5:15am or so). There was complimentary drinks and food. The food selection wasn’t amazing (some sandwiches, cereal, and yogurt), and I went with cereal, milk, and orange juice for breakfast.

I was in a bit of a haze, and found two cool areas to sit in. One was a movie theater type area, but at that time, it was mostly being used for sleeping.

The other chair I found was more like a bed, and I liked it because it was easy to bring a tray up to for eating, and there was also plenty of plugs nearby for charging.

The lounge served its purpose – it was relaxing, there was food, and I was able to unwind in peace before my early flight.

The Avianca employees working in the lounge were very nice and accommodating, and spoke English as well. Surprisingly, no one checked my ticket when I entered, but I think it was because it was so early in the morning.

The flight boarded in my least favorite way – everyone lines up by priority, but then gets on a bus where everyone is shepherded off together. To me, this gets rid of the point of purchasing or having priority boarding. By the time you get to the plane, it’s often that the first people on the bus are the last people off of it, and I was worried I wouldn’t have space for my overhead luggage.

When I got to my seat, I was happy enough with the amount of space. 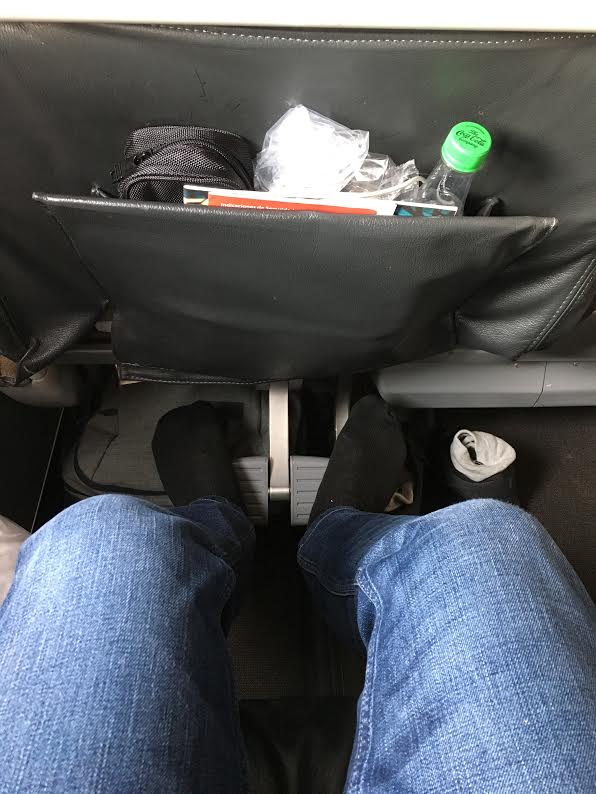 Perhaps I was hoping for a bit more given the 6 hour flight, but I’m pretty small and was able to fit in comfortably. I was also happy that my bag fit under the neat in front of me (on my flight from Bogotá to Cartagena, there wasn’t enough space in Avianca business class for it).

There was also a complimentary bag Tumi bag waiting for me.

In it was ChapStick, socks, an eye mask, a toothbrush, and a few other random items. The socks were especially comfortable and I still use the ChapStick.

Before the flight took off, I was given a menu for the flight’s breakfast.

I was excited to get some eggs, as it had been a few days since I had eaten enough protein. I ended up working most of the time in Cartagena, and Bogotá was a blur.

So, I ended up being pretty upset when the flight attendant got to me and told me that they had just run out of the omelet dish. This is especially since I was in seat 2A, a seat I picked to be near the front so that they wouldn’t run out of options.

The yogurt and cereal was basically a snack, so I had to tostadas con queso – I was not impressed. The consistency was pretty awful, and it wasn’t enough to really constitute a meal. If I would have known the food would have been this bad, I would have skipped the Avianca lounge and had a proper breakfast in the airport.

The TV/movie selection was decent on the flight. I watched Birth of a Nation (which I missed when I was at Sundance in 2016) and some American TV shows. The outlet worked fine, and I plugged my phone in and played some games on it as well.

Flying over South America was beautiful, and I wish I had taken more pictures of it. For the most part, all I could see was clouds, but as we got closer to Santiago, snow-capped mountains appeared. Although I normally take an aisle seat, I would definitely recommend a window for this flight if you can.

The flight took off around an hour late and landed about a half hour late. The service was okay during the flight, but really below standard for what I would expect in business class from a Star Alliance airline. If I took the flight again and could get economy for 20,000 miles (which is the saver price), I would do that over the business option again.

While this flight was nothing to write about home (though something to write you about!), the experiences I had in Bogotá and Santiago made up for any lack of service on the flight.