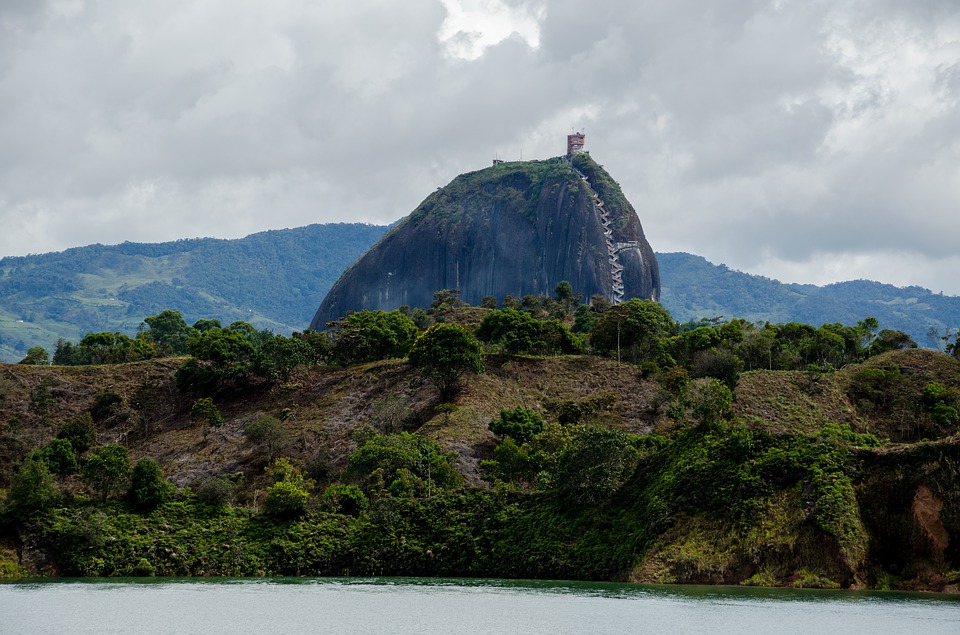 Located roughly 50 miles outside of Medellín is one of the most stunning, but often overlooked, sights in South America – the Rock of Guatapé (known in Spanish as El Peñón de Guatapé and sometimes referred to as the Stone of El Peñol).

Measuring in at over 650 feet tall, the Rock of Guatapé, which is nestled in the northern portion of the Andes mountain range, tops out at around 7,000 feet above sea level.

To get the top, visitors must climb 650 stairs. As you make your ascent, there are markers every 25 steps, helping to remind you of your progress and giving you much needed motivation to complete the journey up.

I booked my tour with Medellín City Tours, which offered a combination Pablo Escobar and Guatapé package for $350 for 2 people. The tour started in Medellín with direct pick-up from my friend’s Airbnb, and the first half the day included visited a few of Pablo Escobar houses, his jail, his grave, and a vista overlooking the entire city. Quite honestly, by the end of this portion of the tour I was already exhausted, but having seen pictures of the Rock of Guatapé before, I knew I had to visit.

My tour guide’s name was Steven, and I highly recommend booking a tour with him if you get the chance. He treated me and my travel companion as friends, his English was amazing, he had great taste in music, and his knowledge of Medellín, Guatapé, Pablo Escobar, and the surrounding regions was incredible. Apparently, you are allowed to drink beer in the car (so long as you aren’t driving!), and him telling me and my friend this helped make the trip even more fun.

The drive from Medellín to Guatapé was rather pleasant and well-paved. There are a lot of turns, though which makes it difficult if you get carsick easily. My best piece of advice here is to enjoy the views and stay off your phone (both to maximize enjoyment of the trip and to avoid getting sick)!

Approaching the Rock of Guatapé is one of the most stunning sights I’ve seen in South America. It reminds me very much of El Nido in the Philippines or Phuket/Koh Phi Phi in Thailand. The massive rock first appears from a distance, and as you get closer, you can’t help but look in awe.

Arriving at the Rock of Guatapé and looking straight up, you know you are in for a workout. I pride myself in trying to stay in shape while traveling, but the 650 stairs (probably more like 675 stairs if you count the extra ones to get to the very top of the summit!) proved a worthy adversary. In fact, the climb and descent were so hard on my body that I had problems walking for a day after the tour was done. Luckily, I had the foresight to book a spa day for the day after my tour, and I was able to get a lot of the kinks/soreness worked out – I’d probably still be recovering without it!

From the top, the view is stunning. A lake called Embalse El Peñol surrounds the Rock of Guatapé in every direction. There are resorts and massive houses scattered below, which you can see from the top. Pablo Escobar had one of his estates in this area and it’s easy to see why – the perfect weather, stunning views, and the Rock of Guatapé in the distance serve to make a surreal getaway. Because of its close proximity to Medellín, Guatapé and the surrounding area serve as a great region for individuals and families to escape city life and enjoy the fresh air and surroundings (although, with a city as beautiful as Medellín, it’s hard to imagine ever wanting to leave).

After climbing the Rock of Guatapé, my tour took me to Guatapé town, which had doors and buildings colors reminiscent of Cartagena. We stopped to get coffee, where an amazing band was entertaining a group of around 100 visitors. The music was truly amazing, adding to one of my favorite experiences in Colombia that I’ve had so far.

The tour (including the Pablo Escobar portion) ended up taking 13 hours, so be prepared for a long day. That said, I would recommend visiting the Rock of Guatapé to anyone visiting Medellín.