If you’re lucky enough, one day you’ll visit the beautiful island of Palawan in the Philippines.

A sun-drenched, tropical paradise with amazingly clear, turquoise-colored ocean water, a tropical climate, and some of the most incredible rock formations anywhere, it’s no wonder that Palawan has been named the most beautiful island in the world.

Nestled in the north lies the town of El Nido, which serves as the gateway to island-hopping in the Bacuit Archipelago.

I ended up on El Nido based on my friend’s suggestion. It began when I landed a $554.66 round-trip, direct flight on United from San Francisco to Hong Kong over Thanksgiving.  I reached out to a friend in Sydney who I hadn’t seen in a few years, asking if he was interested in meeting in the “middle,” and he was. Having already heard great things about Palawan, I suggested the island as an option, and he immediately began to rave about El Nido – a place I had never heard of.  I search for it on Google and could not believe how breathtaking it was, and I gave him the go-ahead to book.

Getting to El Nido is a bit of a challenge, as most airlines only fly to Palawan’s resort-filled Puerto Princessa, about a 4-hour drive south of El Nido. To fly from Hong Kong, I booked a round-trip ticket Manila using Chase Ultimate Rewards (I paid 12,872 in points and $79.60 in cash) and a purchased separate, round-trip ticket on a propeller plane from Manila direct to El Nido on Air Swift, an hour-long flight which cost around $220.  In all, I spent only $854.26 (and 12,872 Chase points) in airfare for the entire trip.

The flight, including my experience at Manila’s airport, one of my least favorite in the world, is covered in a separate blog post.  Suffice it to say, the journey to El Nido was not my favorite part of the trip.

Once I landed in El Nido, I found out quickly that I was in for an adventure. I probably should have known sooner, like when I asked my friend, who arrived a few days earlier, about getting a taxi from the airport and he laughed. But I decided I would rather be surprised, and after claiming my luggage asked where I could get a ride to my hotel.  I was pointed to a tuk-tuk, pictured below. 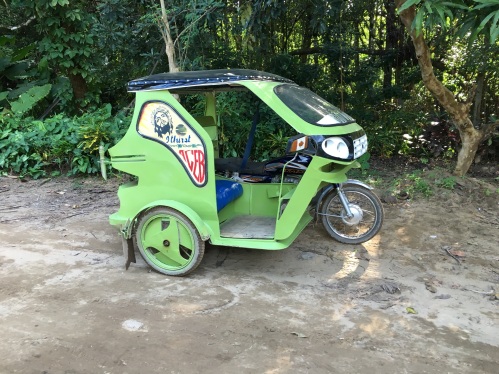 Some people were smart enough to have reserved a tuk-tuk in advance, and it took around 15 minutes in the strong, Philippines sun to find driver, even though I was the first in line. I decided to share the ride with a new friend I had met while waiting, an American named Lana who was on the same flight.

The initial ride through El Nido was stunning. Admittedly, at first I was a little scared in the tuk-tuk, holding on for dear life, hoping I didn’t fly out and/or that the driver didn’t crash. But this fear was soon taken over by awe of the majestic cliffs towering over the town’s center. 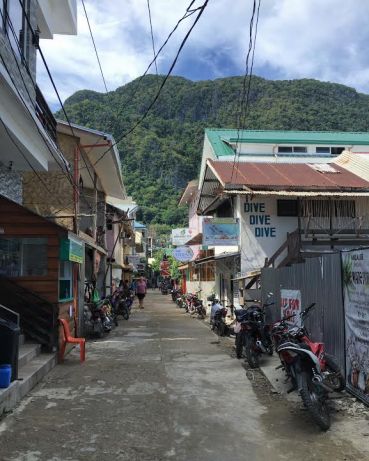 We dropped Lana off at her hostel, and I was excited to check out my hotel, The Resort Bayview Hotel, located at Marimegmeg Beach, about a 10-minute, 150 peso (~$3 USD) ride from El Nido town. My fiend had already checked us in, and knowing I had only a few precious hours to spend before sunset, I ran up to our room and was floored with the view from our front balcony.

Amazing views were a constant theme in El Nido. Pretty much everywhere you go is awe-inspiring, and you absolutely feel like you’re in southeast Asia the entire time you’re there. El Nido reminded me a lot of Koh Phi Phi in Thailand, only the partying was subdued by President Duerte’s war on drugs in the country.

The first night I was there featured the best sunset we had for the 5 days I was there.

I woke up the next morning the way I would wake up for the rest of my trip – to the sound of a rooster crowing. Although I’m not particularly a morning person, there’s something amazing about going to a place where your days are dictated by nature. El Nido was certainly one of these places.

My favorite spot to hang out during the day was a place called The Beach Bar on Marimegmeg beach, a short walk downhill from the Bayview Resort. WiFi was basically non-existent in my hotel and on most of the island, but, from around 9am until noon, I was able to get a decent signal at The Beach Bar. Also, it had a prime location on the beach, very decently priced cocktails ($2-$4) and fruit drinks ($2-$3), and the food was pretty good.  Oh, and the view was out of this world.

When you go to El Nido, you are basically pressured into taking a tour of the surrounding island. There are 4 tours which are offered by basically all the companies there, and the tours are simply called A, B, C, and D. I decided to only do one tour while there – C, which I had heard was the best (and my friends there confirmed this at the end of the tour). The tours usually run from around 9am until 4pm, and visit islands, lagoons, and sites nearby.

El Nido is a small island, and Lana ended up being on my tour. She had met a Finnish couple, and we all spent the tour getting to know one another, which, in addition to the incredible views and experiences that day, was one of my favorite parts of the trip.

I can’t stress enough how beautiful the destinations we visited were, including the Matinloc Shrine, located on a beautiful beach which is pictured below.

We spent the day snorkeling, swimming, sightseeing, and exploring. It was Thanksgiving Day, and while the meal (fish, pork, rice, fruit, and soda) was far from traditional, the view was worth it. (Below is the actual, unedited photo of my view during my Thanksgiving feast.)

Maybe the only downside of Tour C was that it didn’t include any kayaking. Aside from that, I felt it was the perfect amount of time, and would recommend this tour to anyone visiting the island.

Staying near Marimegmeg Beach was a good choice. El Nido town, though stunningly beautiful in its own right and with more restaurants, better WiFi, and more people, doesn’t have the kind of beaches you long for on a tropical vacation. That said, I made sure to visit El Nido town a few times, including for a $6, hour-long body massage and its panoramic views. 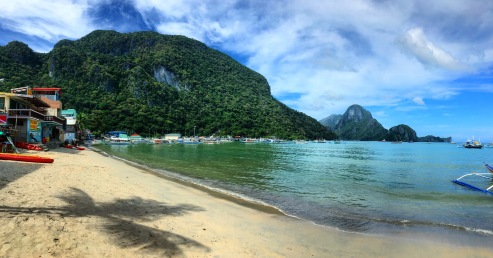 While an idyllic island, El Nido is not without its faults. As a remote worker, it was virtually impossible to get any work done because of the poor WiFi and cell service. If this trip wasn’t over Thanksgiving, I don’t know what I would have done. Also, the town’s infrastructure can barely handle the tourist population, even in low season, and power was shut down in the town and at our resort every day between 10am and 3pm.

I felt as though 5 days was the perfect amount of time, although my friend stayed for 9 days and did not want to leave.  The timing of the trip, end of November, seemed perfect as well, as there were not a ton of people and I was fortunate enough to get pretty amazing weather (aside from a typhoon that passed only 70 miles to the north).

Although currently off the beaten path, there is construction going on all over El Nido, so this island paradise may not remain unspoiled forever. If El Nido wasn’t on your list before, it’s absolutely worth checking out.